Tech companies in and around Detroit are going back to the city’s strengths to rebuild its economy and revitalize the community. Entrepreneurs and innovators have launched more than 100 startups in Detroit in the last few years alone, Liz Gannes writes at Re/code.

Adding to our previous list of high-tech companies and related businesses in Western Michigan, this time we’ve concentrated on 14 innovative companies centered in and around the Detroit area.

The future is increasingly bright in the Motor City.

A full-service app development and marketing agency, Incipia was founded in 2015 by Gabe Kwakyi and Gregory Klein. Friends since childhood, the pair had been kicking around the idea of building an agency for several years, and already the company has team members based around the world. Incipia has its own portfolio of apps, and also builds and markets them for other companies.

The kernel of VisionIT grew from its founder’s volunteer work with Detroit youth. David Segura taught kids about technology and Internet trends, and his impact on the local community is one of the driver’s behind his now 20-year-old global business, which provides managed IT services. Its two other brands, VisionPRO and Prime Workforce, provide IT staffing services to companies worldwide.

Co-founder Anya C. Babbitt launched SPLT, a rideshare service for corporate commuters, in 2015 with TechStars Mobility in Detroit. Its Uber-like mission is to provide users an alternative to getting a ride. With SPLT, though, you’ll share with ride with other employees. To date, SPLT is available in Detroit, New York San Francisco, Austin, Denver and Atlanta.

Owned by Susan Sprentall and based in Wixom, SurClean has developed technology that can remove coatings with a laser, which the company says works 16 times faster than chemical coating removal. This becomes an effective (and more energy-efficient) way to remove paints or rust from bridges, ships and aircraft.

Led by software developer Paul Tibbert, Grid helps its clients succeed by building software that grows their businesses. Companies of all sizes — including Chrysler, Stanford University, NAVTEQ and SmartMRO — have worked with Grid’s team of developers and designers. Founded in 2008, the firm offers web design and development, app development, and branding and strategy services from its offices in Detroit, Denver and Honolulu.

Founded in 2010, Delphinus Medical Technologies is a spin-off subsidiary of the Barbara Ann Karmanos Cancer Institute and is located in Plymouth. The privately held medical technology company, led by president and CEO Mark Forchette, has developed an ultrasound breast cancer detection device called SoftVue. It uses sound speed transmission information, reflection and attenuation as the basis of its imaging, which can be used for diagnostic applications.

This app development company counts among its customers both local startups and giants such as Domino’s Pizza and Chevy. Paul Glomski, CEO and co-founder of Detroit Labs, writes on his LinkedIn profile that the company “aims to help revitalize Detroit by producing cutting edge technology in the heart of downtown and fostering a strong community of entrepreneurs.”

Testing multiple proteins at the same time is crucial to the development of new medicines, and the team at PHASIQ, a bio-science research and development company in Ann Arbor, have developed technology that lets them provide multiplex protein measurements. Founder Shuichi Takayama is a professor at UM.

A member of the 2011 TechStars NYC class and founded by lawyer and lifelong entrepreneur Jeff Epstein (who says he has a “ninja-like backhand in ping pong”), Ambassador is technology that automates referral marketing campaigns. Companies using Ambassador include PayPal, HP, the American Marketing Association and Spotify. Skye Durrant and Brandon Bertrang, the co-founders of LawnGuru, developed the app to connect outdoor service providers with local customers who need their lawns mowed or driveways plowed. The two-year-old company is a 500 Startups Batch 15 grad and currently serves 14 cities across the state. According to SE MI StartUp’s Jon Zemke, the company hopes to expand to Chicago, Cleveland and Indianapolis later this year.

Elegus Technologies, a Techstars Mobility start-up in Detroit, is using nanotechnology to make battery separators that will lead to safer, longer-lasting batteries. One of its cofounders, John Hennessy, demonstrated how the high-tech battery filter is used to reduce overheating and fires, Matthew Dolan of the Detroit Free Press writes. When making his pitch to investors last year, Hennessy “wore a Kevlar vest to illustrate how the material used in the vest was the same as his company’s new product.”

Providing managed cloud services, IT operations and applications hosting to industry and government, Secure-24 in Southfield had a stellar 2015. The company won awards and mentions from Ernst & Young as an Entrepreneur of the Year finalist and in Crain’s Detroit Business, making both the Top 50 Emerging Company list and taking CFO of the Year.

Are You a Human?

The team at Are You a Human?, a digital security company headquartered in Detroit, New York and Los Angeles, helps websites validate traffic to ensuring those visitors are real people and not bots. Co-founder Reid Tatoris explained to Advertising Age that “more than half of all Internet traffic is generated by non-humans. Those problems range from social media fraud, spam, bank account hacking, content piracy and advertising waste.”

The customer engagement platform known as My Dealer Service is a graduate of the 2015 Techstars Mobility Program in Detroit. In fact, since then MDS founder and CEO Jon Rossi has continued to be part of the Techstars network, acting as an organizer, facilitator and mentor.

The web-based software app My Dealer Service connects automotive service departments with their customers in real-time throughout the vehicle repair process. The result is improved workflow, efficiency and customer service. 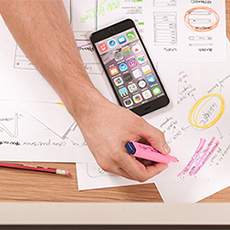