Bringing Nature In: How Plants and Green Spaces Benefit Your Building 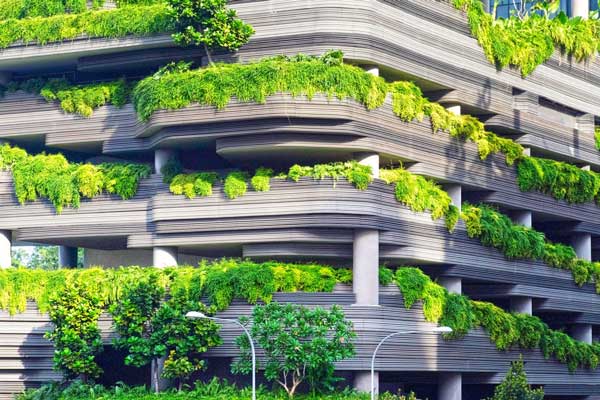 Buildings that feature greenery and natural light do more than just look good. The green spaces prove beneficial to building occupants, and even the building itself stands to benefit.

The research on how indoor greenery impacts employee health and productivity can’t be refuted, and its positive effect continues to be seen. When plants are used on the walls and roofs of buildings, the results are positive too:

Here’s a look at how and why facilities managers can use greenery to benefit their buildings.

Take a look at the infographic by Ambius, a company that’s been enhancing interior landscapes since 1963. It shows that presenteeism — when employees are physically at work, but mentally checked out — is reduced merely by the presence of greenery in the office.

This is good news: Presenteeism costs US employers as much as $250 billion each year.

Plants make indoor spaces healthier for the occupants, both in terms of physical and mental health. Having indoor plants in the office reduces:

Natural Light is Good, Too

It’s not just greenery that’s good for us. Natural light is increasingly part of well building design, and research consistently confirms its benefits.

“A study showed that students in classrooms with more natural light scored 25 percent higher on standardized tests than other students in the same school district,” senior writer Brian Clark Howard at National Geographic points out.

He refers to the nine foundations of built environments necessary to optimum health, which were created by Harvard public health researcher Joseph Allen and the Healthy Buildings Team.

One of those foundations is lighting and views, part of which includes providing: “direct lines of sight to exterior windows from all workstations [and] as much daylighting and/or blue-enriched lighting as possible without introducing glare. Incorporate nature and nature-inspired design indoors.”

Greener Buildings Have a Measurable ROI

The link between healthy buildings and higher employee productivity and reduced absenteeism is clear. This means facilities managers can actually measure health and introduce related solutions into their budget proposals.

“Underpinned by the growing body of scientific research, the healthy building movement is increasingly being embraced by real estate professionals and the marketplace,” Clark Howard writes. “Relatively small upfront costs to facilitate changes are routinely recouped through higher rental rates.”

FMs might even argue to include a flower and plant fund in their annual expenditures. Healthline cites one study which finds that the presence flowers can improve memory.

Outside and On Top: Heat Islands

The Environmental Protection Agency has a good section on its site about heat islands and how to cool them.

Heat islands are usually found in urban areas that are low on green space, but dense in buildings, roads and parking lots. The surfaces absorb heat and don’t release it very well — in contrast to vegetation, which provides both cooling shade and evapotranspiration. Trees and plants can make a space cooler by as much as 45 degrees.

Using vegetation wisely can be an energy-saving feature and make a building more comfortable, especially one that exists in a heat island. “Researchers have found that planting deciduous trees or vines to the west is typically most effective for cooling a building, especially if they shade windows and part of the building’s roof,” the EPA writes.

The EPA also recommends green roofs as a cooling measure. Rooftop gardens not only reduce the temperatures of roof surfaces, but they also can be used for stormwater management. And if the roof is made from a material (or coated with one) that reflects light and heat, the temperature is lowered, thus reducing the demand for energy to keep building occupants comfortable.

In the Netherlands, Sempergreen is a company that makes vegetation blankets for green roofs and wall covers. Green roofs have some important benefits, they say:

Christina Stone at the Yale Environment Review recently took a look at how engineers in Italy are bringing the two energy-efficient roof technologies together, so that even historic buildings protected from extensive remodeling can benefit.

Green roofs are permitted on most old buildings in Europe; it’s the extensive renovations that cool roofs require that are the problem. Stone says the team used denser vegetation than many green roofs have, using plants with light-colored leaves effective at reflecting sunlight, to mimic the effect of the materials used in cool roofs.

“The results of their experiments showed that cool-green roofs can reduce energy use by 97 percent in the summer and 42 percent in the winter,” writes Stone. “This technology increased the amount of sunlight that a roof can reflect, keeping the building cooler with less energy used. Finally, the cool-green roof drastically reduced the amount of time during which the building was uncomfortably warm, and even marginally reduced the time during which it was too cold.”

While the study was conducted specifically on protected buildings, there’s no reason why cool-green roofs could not be installed onto existing buildings and incorporated into new constructions.

The Near Future: Buildings Made of Plants

If greenery in our workspaces makes us healthy, smarter and happier, imagine how we’d benefit from a built environment made out of plants.

Flora Robotica is a project funded by the European Union’s Horizon 2020 program. Its team of engineers, architects and scientists are working to merge robots and plants. Their idea is that the ultimate goal of actually growing our built environment begins by benefiting plants through the use of automation.

You see simple versions of this relationship in practice now, such as sensors that detect when plants need to be watered, for example. Researchers see a time, not too far off, when robots will assist plants to sustainably grow everything, from furniture and buildings to whole cities.

Another way the plants and robots currently interact is that robots use different colored lights to attract the plants and coax them to grow toward those lights. The robots control the direction of growth, which can be done in two or three dimensions. Still another interaction is through the use of smart material, a soft braided scaffold that is embedded with robots, around which plants can wind, grow through or even within.

It might take 40 years to grow a house (the scaffolding is removed one piece at a time when the plants are strong enough), Elizabeth Boorman writes at Horizon, but the wait will be worthwhile.

Imagine having a living building that can interact with the humans within. 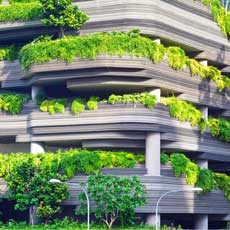